(10 servings) This Indian main dish has been adapted to a crockpot method of cooking without too much compromise in flavour. 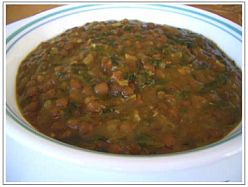 Note: Garam Masala – This may be purchased prepared in most East Indian food Stores. There are as many recipes for this aromatic blend as there are Regions in India.

Grind in a spice or coffee grinder