What is wrong with genetically modified foods? 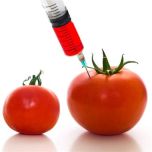 Genetically modified foods have had their DNA specifically changed by genetic engineering techniques.  Many of the alterations were done to make the foods more resistant to herbicides or viruses to allow for less damage to crops and potentially leading to higher yields.  This sounded appealing to most farmers. The problem has been that these changes were made without the understanding of the possible long-term effects on human health.

These foods are genetically different from their natural origins.  Our bodies have been hard-wired throughout human history to breakdown foods that are part of nature.  When foods are manipulated and changed our bodies have a challenging time recognizing them, properly breaking them down and metabolizing these foods.  Biochemically, the body may see these foods as foreign bodies and treat them as toxins, ultimately making the food of no nutritional value to us.  Or the food can be incorporated into our cellular DNA, which has the potential to cause damage as the altered or manipulated DNA should not be part of our cellular structure.  The possible implications on our health are unpredictable.

Animal feeding tests have shown worrying health effects. Here’s an example: GM sweet corn contains Bt toxins, designed to protect the plant by rupturing the stomach of an insect that feeds on it. Monsanto claims that the toxin will break down before it is consumed by us, but when rats were fed the GM corn they showed organ failure and the toxin have been detected in the bodies of pregnant women. The potential risks of GM foods on our human health are more than troubling and challenging to avoid in North America due to our laxity of our labeling laws.

If you live in Europe, avoiding GM foods is easier since laws require labeling. However in the US and Canada food manufacturers are not required to label if their food is genetically modified or not.