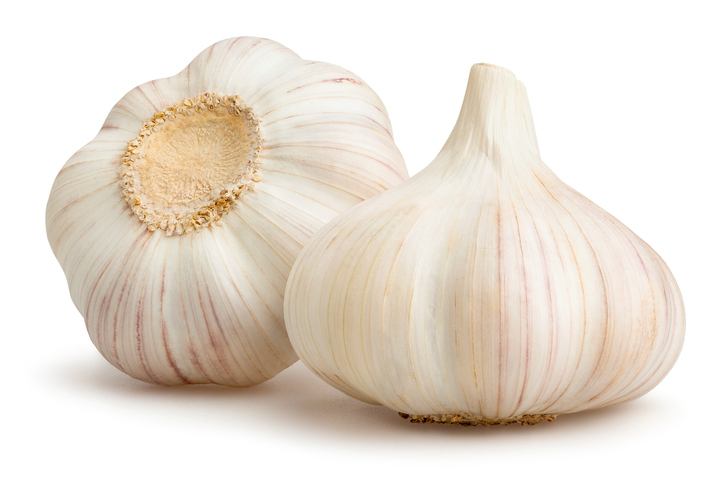 Allium is a family of bulbous, flowering plants in the lily family of over 700 varieties  including garlic, onions, leeks, scallions, shallots and chives. In Latin, Allium translates to ‘sharpness’ and sativum, ‘cultivated’.

The historical use of garlic dates back thousands of years. There are medicinal and culinary references for it’s use by the ancient Egyptians around 1500 BC and earlier.  In several ancient Indian medical texts (~300AD), garlic was chosen for cardiovascular and arthritis conditions. Widely used in the Renaissance period, garlic was most known for treating digestive ailments, parasites and various infections.  Today, garlic is used around the world for many conditions, most commonly as an anti-microbial, to reduce cholesterol levels, hypertension and cardiovascular risk and, most recently, for it’s anti-cancer properties.

The most popular forms and preparations include raw and aged garlic extracts (AGE), steam-distilled garlic oil, ether-extracted garlic oil, heat-treated garlic and granulated garlic.  All differ in the composition of water-soluble and fat-soluble sulfur compounds, the most well known being Allin.  When garlic is chopped, chewed or crushed, allinase enzyme is activated and transforms the alliin into allicin.  Allicin then quickly changes into several sulfur-based fat and water-soluble compounds and some can liberate hydrogen sulfide. The beneficial physical effects of mildly stimulating the hydrogen sulfide signaling system include blood vessel relaxation and various anti-cancer actions.

The choice of preparation will depend on the target of treatment. Most antimicrobial and cardiovascular properties are contributed to allicin and it’s sulfur-based components. It is a highly unstable compound in supplement form, unless professionally processed.

Aged garlic has been widely studied. It is prepared by infusing raw garlic in 15-20% ethanol for at least 1.5 years. This process isolates strong antioxidant compounds such as selenium, L-arginine, allixin, S-allycysteine among others. The advantage with AGE is that it is almost odourless.

Allicin has been shown to be easily absorbed through the cell membrane without irritating a cell’s membrane bilayer. Allicin works to enhance antioxidant action by lowering the level of reactive oxygen species and stimulating the production of glutathione.   The compounds in garlic can effect enzymes that are responsible for LDL cholesterol levels, decrease coronary artery calcification & platelet stickiness, reduce lipid oxidation of red blood cells and lipids.

Garlic has been shown to play a role in reducing the toxic effects of heavy metal burden, especially lead and mercury.  In a 1955 Russian study, therapeutic doses of garlic extract were found to bind with heavy metals in the body, helping with elimination and reducing symptoms. Similar results were observed in experiments that took place in Japan using mercury and cadmium.

There has been an increase in research on the efficacy of garlic compounds used in vivo and in vitro studies.  Most research involving the anti-cancer effects of garlic pertain to gastric cancer, colorectal and liver cancers.

While the mechanism of anti-cancer actions are multi-factorial, in-vitro research shows activity through all stages of cancer growth.  These include detoxification, reducing inflammation, DNA repair, improved anti-oxidation activity, boosting enzymes that remove the effects of carcinogens and reducing a tumor’s ability to grow new blood supplies.  Garlic may also play a part in help to prevent drug resistance in the treatment of malignant cancers.

Black garlic has arrived on the trendy food scene as a popular and trendy culinary ingredient, being marketed as a high antioxidant superfood. Forms of fermented garlic have long been eaten for health reasons in Korea and Japan. The process of aging garlic for 15 to 90 days in a low heat-high humidity environment turns the cloves black, soft and sticky, altering it’s potency into a caramelized, subtle garlic flavour. Known as the Maillard reaction, the chemical process produces new flavour compounds. Watch for black garlic on restaurant menus and trendy food blogs.

While 2-4 cloves of raw garlic can be safely consumed and be well-tolerated, it causes a strong breath and body odour and for some individuals, nausea and heartburn. Aged garlic can be an excellent alternative, a minimum daily dose being around 500-600mg.

A report in the “Journal of Epidemiology” in 1999 looked at rates of gastric cancer in relation to consumption of garlic and other allium vegetables such as onions. The researchers found consuming garlic three or more times a week may have a role in helping to decrease gastric cancer risk.

Side Effects and Safety

Conditions such as immune deficiency and HIV, the use of Diabetes mellitus medications (sulfonylureas), iodine metabolism, anticoagulent and blood thinner use, pending surgery and acute inflammation may require guidance and close monitoring by your Naturopathic doctor if you’re considering larger doses of garlic supplementation.

If you are considering a garlic supplement, it’s best to consult with your Naturopath to ensure its safety and dosing protocols are suitable for you.