What are the effects of microwaving our foods on our health? 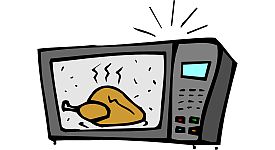 The first domestic microwave oven came onto the market in the 1950s.  It was sold as a quick and easy way to defrost or heat up food.  It is now a common household kitchen appliance is most homes in the western world.  Unfortunately, no reliable research was done on the effects of microwaved foods on human health prior to release of this highly-used appliance.  In 1975 a histological study was published in the Journal of Food Science, revealed when broccoli and carrots were microwaved there was deformed molecular structures of nutrients to the point of destroying cell walls, in comparison to conventional cooking where the cell structure remained intact.

When proteins are microwaved, a high percentage of the proteins configuration is altered, and this makes it difficult for our bodies to properly metabolize these foods.

Lubec et al conducted a study on microwave-heated infant milk formulas and published in the Lancet in 1989 found that a high percentage of proteins configuration was altered from a trans to cis formation.  Lubec et al stated that “the conversion of trans to cis forms could be hazardous because when cis-amino acids are incorporated into peptides and proteins instead of their trans-isomers, this can lead to structural, functional and immunological changes.”

Therefore, microwaved foods can have a negative impact on our health and is it recommended that you do not microwave foods for human consumption.