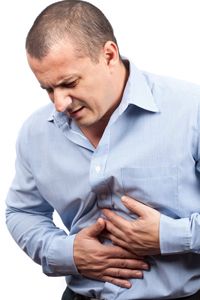 Adverse reactions to foods are extremely common and can manifest in a variety of ways from digestive upset, to chronic fatigue, to life-threatening anaphylactic reactions. A truefood allergy involves an immune response to food where the body mistakenly identifies certain food proteins as harmful and produces antibodies against them.  A classic allergic reaction, as diagnosed by a skin prick test, involves an antibody called immunoglobulin E (IgE).  When the body is re-exposed to the offending food, these IgE antibodies, which are attached to immune cells called mast cells, combine with the food proteins (called antigens) initiating histamine release and inflammation.  Symptoms generally occur within seconds to minutes after exposure and include the following: rash or hives, nausea, stomach pain, diarrhea, itchy skin, shortness of breath, chest pain, swelling of the airways to the lung, and anaphylaxis. The most common foods to trigger this type of reaction are: peanuts, tree nuts, milk, eggs, sesame, fish and shellfish, soy, wheat and sulfites.

In addition to IgE-mediated allergic responses to food, there are other ways that the immune system can react negatively to foods. Whereas reactions involving IgE antibodies typically occur right after eating a particular food, there are delayed reactions mediated by a different antibody called immunoglobulin G (IgG), which take hours or even days to develop. If the immune system canT clear out the IgG-antigen complexes quickly enough, they start to build up in the body’s tissues and create inflammation. IgG-reactions have been implicated in irritable bowel syndrome, migraines, fatigue, difficulty losing weight, chronic sinus and ear infections, joint pain, and eczema.  IgG food sensitivities can be tested through a simple blood test (eg Rocky Mountain IgG Blood Spot Test).

Celiac disease is another example where the immune system goes awry when exposed to a certain food, in this case gluten. In people with celiac disease, gluten, a protein found in certain grains, such as wheat, barley, rye, spelt, and kamut, stimulates the production of auto-antibodies that cross-react with the lining of the small intestine. Consequently, celiac disease is not considered a true allergy but rather an auto-immune condition that results in the destruction of the absorptive surface area of the intestines with both digestive and systemic implications. Blood test to measure the immune systems response to gluten include anti-gliadin IgG, anti-gliadin IgA (gliadin is a component of gluten), and anti-tissue transglutaminase. The current gold standard to diagnose celiac is through an intestinal biopsy. About 1 in 133 people have celiac disease but it is estimated that 1 in 20 people have gluten intolerance in which ingestion of gluten results in digestive upset and inflammation but does not stimulate an auto-immune reaction. Gastrointestinal symptoms of gluten intolerance can include diarrhea, bloating, cramping, abdominal pain and constipation. Behavioral symptoms can include “foggy mind,” depression and ADHD-like behavior. Other symptoms include anemia, joint pain, osteoporosis, and leg numbness. The only way to confirm gluten intolerance is by avoidance and re-introduction as there are no blood tests to check for gluten intolerance.

Food intolerances are reactions to foods that donT involve the immune system but instead occur when a food component irritates the digestive system or from the inability to digest or absorb a certain food. They also tend to be dose-dependent meaning that unlike true allergies, which can be triggered by a very small amount of food, symptoms of intolerances often occur if the food is eaten frequently or in large quantities. For example, people with lactose intolerance lack the enzyme lactase needed to break down and absorb lactose, a sugar found in milk. When someone with lactose intolerance ingests dairy that contains lactose, they can experience nausea, gas, bloating, abdominal cramping, and diarrhea. Other substances found in foods that people can have difficulty breaking down or absorbing include fructose and histamine. There is also a group of short chain carbohydrates and single sugars called FODMAPs (Fermentable Oligo-, Di-, and Mono-saccharides and Polyols) that can cause symptoms of irritable bowel syndrome in certain individuals. These substances are poorly absorbed in the small intestine and move on to the large intestine where they are fermented by bacteria in the bowel resulting in digestive disturbance such as bloating, gas, abdominal pain, and alternating constipation and diarrhea. It is possible to identify these malabsorptive conditions through a hydrogen breath test.

There are many factors that contribute to the development of food allergies and intolerances. In IgE-mediated allergies and Celiac disease, a genetic predisposition can skew the immune system to react inappropriately to certain foods. When it comes to IgG food sensitivities and other food intolerances, weak digestion, dysbiosis (unbalanced bowel flora), stress, and poor dietary habits can play a role in the development of symptoms. In an ideal digestive situation, a variety of healthy food is well-chewed in a relaxed environment where there is adequate stomach acid and digestive enzymes to break down to food into simple sugars, amino acids, and fatty acids. These small food particles are then absorbed though the cells that line the small intestine and into the blood stream. If food is poorly digested, bacteria and yeast can start to break it down resulting in the formation of gas and toxic metabolic by-products. Tight junctions, which act like little snaps, hold together the cells of the small intestine so that nothing can sneak through. However, stress, chemicals, infections, and certain foods (eg gluten) can dismantle these junctions so that the lining of the gut becomes leaky and undigested food and toxins can slip between the cells. This is problematic because just outside of the digestive tract is the gut-associated-lymph tissue, which contains more immune cells than anywhere else in the body. The immune cells see the undigested food as a foreign invader and start to attack it resulting in the formation of IgG antibodies and general inflammation. Consequently, when treating food allergies and intolerances, is very important to ensure to treat dysbiosis, ensure that there is enough stomach acid and digestive enzymes, as well as healing the digestive tract to make sure it isnT “leaky”.  Addressing stress is also key to ensure proper digestion and absorption of nutrients as well as repair of the digestive tract.

In addition to conventional allergy testing that uses a skin prick/scratch test and the use of blood tests to look at antibody formation, Muscle Response Testing (MRT)and Electro Acupuncture According to Voll (EAV) can be used to determine which foods elicit a stress response in the body. Both of these forms of assessment work at the level of the nervous system; MRT uses a muscle reflex where as EAV looks at electrical conductivity through acupuncture points. MRT and EAV are not used to diagnose anaphylactic (IgE) allergies, nor do they differentiate what type of reaction is occurring, but they are very accurate at assessing which foods are negatively impacting the body.